ABH
Many times today Leone (Aussie nun) called out “ABH”, and sure enough, we would all look up to see Another Bloody Hill. After the obligatory photo op stop at Bodegas Irache, which has two taps for peregrinos, one with wine and the other with water, we had two choices of route, one being higher but almost 2k shorter. We took the high road and were rewarded with a climb to 720m, but through woodlands initially and then with beautiful views of pasture land and distant mountains. The weather was cloudy but warm enough for shirtsleeves, ideal weather for walking.
I went at my own pace and was walking alone for a good stretch of the day. I used my MP3 for the first time on long/high stretches (thanks G), and a mixture of Verdi and Abba spurred me on. I also took my boots off for two 20min breaks and was in a better state at the end of the day than I was yesterday. As it is a holiday today (Mayday), we were warned that our end stage town would be very crowded because of a festival tonight. We were lucky to get beds in an Austrian Albergue and have mattresses on the floor of the attic of this 200 year old building. It’s a quirky and really friendly place and it’s full of familiar faces including David (originally from Uxbridge but now living in Colorado). He’s a freelance wildlife photographer and a fellow heathen. I walked with him for some of yesterday and his stories of assignments in India and Japan in particular helped some miles to pass more swiftly. 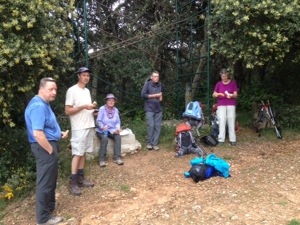 A housewife who loves to craft and loves her cats! ❤

The Very Last Day One

it's time to get sober and stay sober

a sideways look at the world of walking

Ideas That Grow and Bloom

Tales from the AUTHENTIC Costa del Sol .... and beyond

If sarcasm and self deprecating humour were an Olympic event I'd definitely qualify.

Life and scribbles on the far side of SIXTY-FIVE

A Foot in Two Campos

Falling in love with the Axarquía

. . . An oldish woman's adventures on foot

An 800k journey across Spain on WordPress.com

learning the unforced rhythms of grace

stories of trekking and travel

Cubicle escape artist on the lam

Walking on the Camino

Get answers to all your questions just by walking 800 km